Two Sides of the Same Coin: Right Wing Concerts: A Cocktail of Emotions 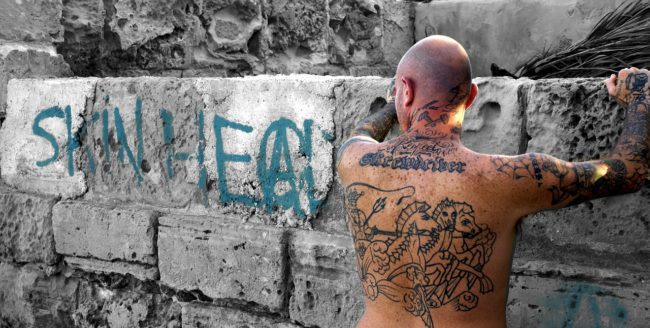 In the following I want to show why people visit right wing extremist concerts, what makes them “interesting” and what happens there:

The first Nazi concert I ever went to did not take place in Germany, but like many others in Europe, was to due in Nothern Italy. Here the anti-hate speech laws which most European governments have in place are not as strict and from my experience not enforced either.

Pizza, Party and the Simsons

I flew to Milan with a friend of mine at the time and we spent a better part of the day travelling by bus and train to a small village where our hotel was. Interestingly the owner of sais hostel knew about the concert but apparently was not informed of its nature. Since we had one day to kill before the event we spent the day sight seeing around the town and experiencing the local cousine and aloholic beverages. The evening was spent sitting on the porch of the hostel talking about the newest Simsons and How I met your Mother episodes. It all sound rather normal and wouldn’t it have been for our militaristic style of the dress and the offensive merchandise we were wearing, one could have mistaken us for simple tourists spending the weekend to explore rural Italy.  Now, did politics or racial hatred play a role in our conversations? Sometimes it did come up when we were discussing the quality of the newest CDs; other than that, rarely.

Now on the day of the concert, I was a little on edge. I had basically no experience with the right wing scene other than from the music and it’s elite and violent flair which partly drew me into it was also becoming worrisome. To compensate my insecurities I “dressed up” in the most provocative way I could. Certain tshirts and other merchandise did function as symbols of status in the scene and to cover up my own inexperience I tried to “blend it” and “belong” this way. Strangely this did lead to a sort of “dress battle” with other visitors of the concert and hotel guests who were trying to outdo one another with who could look as offensive as possilbe.

The gig itself took place in a “normal” bar and concert hall near a main high way. I did remember feeling rather embarrassed seeing the bewildered looks of the bar staff when, in the course of the gig, more and more swastika flags were being raised amongst the crowd and from the stage.

The concert itself was not really that much different from other gigs I had experienced before. The lingo of the crowd was different with expressions like “Sieg Heil” and “Heil Hitler” having replaced “Hello” or “Hi” right at the start, but other than that it was very similar. The first bands of the evening were being skipped to booze up, scroll the merchandise or to meet and greet fellows and new acquintances. Finally, before the main acts everyone who was still concious gathered before the stage greeting the bands with a raised arm.

Now am I implying that these types of concerts are “normal”? A simple subculture with extreme lyrics which are just there to challenge the left-leaning societies of Europe? No, I am not. First of all, these concerts are not mainly attened by young people with a wish for rebellion. The majority of the audience is well above 25 ranging into their early 50s. Additionally, while politics and hate crimes, might not be a topic for most of the visitors, the events are organized by mainly transnational hate groups which do commit violent crimes and use these types of gigs to fund their organisations. During this concert a local political group from Austria was raising money for “imprisoned freedom fighters” which basically translates to two violent skinheads who were imprisoned in Austria. Also, these concerts help the radicalisation of their audience. The literature which is sold there propagates the Third Reich or other extreme nationalist ideologies and the possibility to “freely express” oneself there implants the ideas further into one’s mind and makes this type of behaviour appear “normal” and “okay”. It of course also raises the danger of connectivity: Meeting people there, meeting them again and it can end up in the founding of an extremist organisation.

I want to finish this short essay with a conclusion: Why did I go there? Well, it wasn’t the ideology. It was a mixture of different desires and a wanting for a way to escape my stressful life at home, being a part of an elite group, the sense of danger, exitement and adventure and also to see bands which I liked to listen to. All of these come up at one moment or another during the entire process of finding, meeting, travelling and visiting such an event. First there is a sense of joy, meeting people again with whom one shares a common interest which one can only discuss with that person. In preparation for my job I could hardly talk to fellow students about the music I listened to or show them the right wing merchandise I had in my closet. And this secrecy and therefore bond was strong and very appealing to me at the time. During one’s travel one is also faced with a brief but firm sense of “danger”. The possibility of “getting caught” while travellign through different countries was there and slim the chances maybe it was still present. Having then reached the country, where the concert is, there is a sense of joy but also a bit of competition: “Who got away with the most offensive style of dress” This was usually celebrated with a rather blant expression of “Sieg Heiling” as it was called at the time. When one returned it also gave one a sense of pride. One is “one of the real fans” now, not one of those “weaklings” who like to listen to that type of music in the privacy of one’s own home, but would never dare to actually go there.

This emotional cocktail is also what makes leaving the extremist scene behind so hard.