No Violent Extremist is An Island 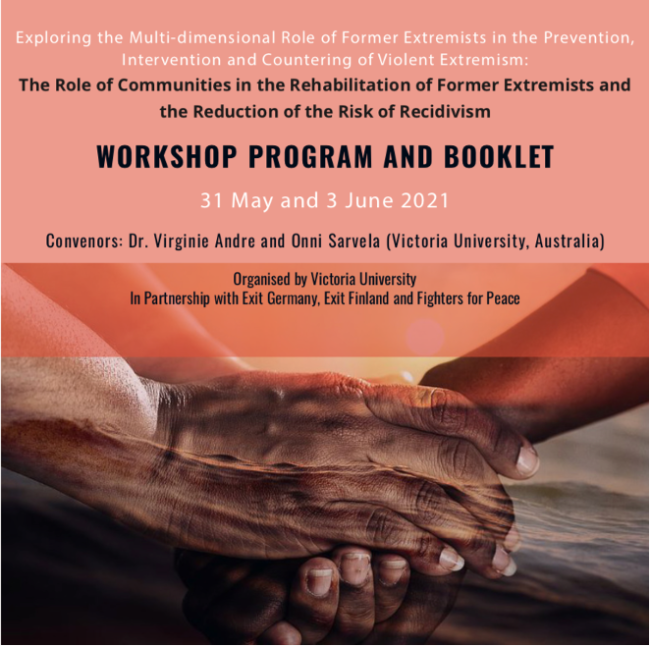 The Role of Communities in the Rehabilitation of Former Extremists and the Reduction of the Risk of Recidivism.

This article is review on a series of international online workshops on the Multi-Dimensional Role of Former Violent Extremist in the Prevention, Intervention and Countering of Violent Extremism launched by Victoria University in 2020 in partnership with Exit Finland and Exit Germany. And a third workshop was organised by Victoria University in partnership with Exit Finland, Exit Germany and the Lebanese Fighters for Peace.

Dr.  Virginie  Andre  is  a Victoria University Senior Research Fellow. Virginie has an expertise in terrorism and countering violent extremism, strategic communication, media and terrorism, and ethno-nationalism and conflict transformation. She has a particular interest in disengagement from violent extremism and youth radicalisation. In the last fourteen years, Dr. Andre has researched diverse communities in Europe, Northern America, Southeast Asia and Australia. She delivers presentations at a range of international and domestic academic conferences, coordinated Monash University’s Counter Terrorism Masters Program, and lectured in post-graduate university courses. She has also undertaken research for the European Union, the Department of Premier and Cabinet of Victoria, Victoria Police, the Australian Attorney’s General Department, the Australian Department of Foreign Affairs, the Belgian Ministry of Foreign Affairs,  the Ministry of Foreign Affairs of Thailand, the  World  Bank  and  the  Office  of  the  National Broadcasting and Telecommunication Commission  of Thailand. She also conceptualised and delivered trainings in strategic communication to counter violent extremism to government officials, media practitioners and front line practitioners (including military). Her latest publications are: ‘Understanding the Impact of Terrorist Event Reporting on Countering Violent Extremism: From A Practitioner’s Perspective’ (2018), ‘Violent Jihad and Beheadings in the Land of Al Fatoni Darussalam’ (2015), ‘A Fragmented Discourse of Religious Leadership in France:  Muslim Youth between Citizenship and Radicalization’  (2015),  ‘Religious Citizenship and Islamophobia’ (2015), ‘Merah and Breivik: A Reflection of the European Identity Crisis’  (2015).  Virginie holds a PhD degree from Monash University and a Masters degree from the National University of Singapore.