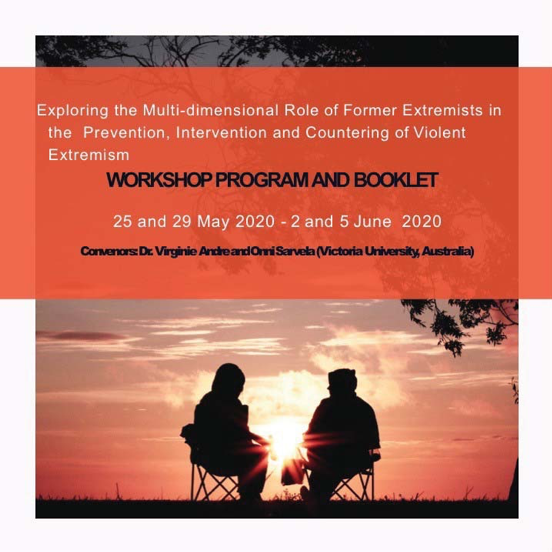 The first series of international online workshops on the ‘Multi-dimensional Role of Former Extremists in Prevention, Intervention and Countering of Violent Extremism’ was launched on 25 and 29 May, and 2 and 5 June.

In the current context of returning foreign terrorist fighters (and their families) and the release in some European countries of convicted violent extremists who have reached or are nearing the end of their prison sentence, the question of better understanding the current (and potential) role that former extremists can play in the prevention, intervention and countering of violent extremism has become a criticalone.

Workshop convenors, Dr Virginie Andre and Onni Sarvela (former Exit Finland mentor) explain that ‘this is even more significant in the present context of an increasing global polarised political and xenophobic environment, which is enabling a dangerously fertile milieu for violent extremist groups recruitment’. In addition, the coronavirus pandemic has also created opportunities for extremists to spread fake news, strengthened their narratives and further polarised communities and young individuals. The risk of reciprocal radicalisation is real and the propensity for it to move from marginal groups to society is equally tangible and dangerous.

Hence the role of former extremists in the prevention, intervention and countering of violent extremism is not to be underestimated, particularly as potential agents of counter- polarization and community bridge-building.

Canadian practitioners Tony McAleer and Brad Galloway offered a perspective of two generations of violent far right on the leaving and combatting of violent extremism. Their personal journeys in and out of violent far right extremism highlighted some of the deciding factors that contributed to their disengagement. As McAleer explained: ‘It was all bullshit. The reality didn’t match the great fantasy that was offered to draw me in.’ The disillusionment towards the extremist group can be a first step towards disengagement. Furthermore, Galloway described how ‘the violence started to become exhausting’, and how ‘the lifestyle was uncertain’. Physical and emotional exhaustion from taking part in the dysfunctional, unhealthy and often violent extremist environments can further contribute to leaving extremist groups. McAleer and Galloway’s experiences also showed how social relationships and positive encounters could be significant factors in the disengagement process.

The workshop also gave the participants the opportunity to experience firsthand the Canadian Hexagon model of introspection into self- assessment of individual disengagement process from violent extremism. Margaux Bennardi and Roxane Martel-Peron of the Quebec Centre for the Prevention of Radicalisation Leading to Violence (CPRLV) provided participants with a case study of disengagement from violent extremism, which they had to examine and assess with the support of the Hexagon model. A small number of practitioner participants are already using this model in their front-line work and others are now exploring how this new tool might be added to their toolbox and research in countering violent extremism.

The workshop offered the opportunity for policy-makers and law enforcement officers to share the difficulties and challenges they meet in wanting to involve, or actually involving formers in their intervention work preventing and combatting violent extremism. Some of the challenges revolved around how to correctly identify suitable former extremists to engage in this sensitive area of work; how storylines of individuals involved overseas can be verified (false or fabricated stories); and, lastly, how to have a sensible process that takes into consideration and properly address the needs of former extremists engaging in this work and the needs of government and security agencies. In some countries, as pointed out by several participants, the decision by certain agencies and governments, whether to involve or not former extremists, is highly politicised, and often reactive. Moreover, an emphasis was made by all participants around the importance of the notion of duty of care towards involving former extremists in this field.

Belgian MP and former Vilvoorde city deradicalisation officer Jessika Soors explained how a former returnee who expressed interest in engaging in exit work approached her. Her first question to him was ‘How would this impact on your new life?’ (need of the ‘former’). Secondly, ‘How would this influence your relationship with security agencies?’ (need of security agencies). Additionally, MP Soors pointed out that there currently are no structures or exit programs in place to do this type of work in Belgium. Finally, she questioned how the public should be informed of such programs.

“COMMUNITIES ARE OFTEN RELUCTANT TO WELCOME BACK FORMER EXTREMISTS”

This denotes a clear need to balance the needs of ‘formers’, governments and other stakeholders when involving formers in prevention and countering of violent extremism and counter terrorism efforts.

Participants commended the workshop for its timely relevance, content, quality of the participants, interactivity and holistic approach to the issue. A participant noted: ‘The topic is very relevant to my own field of work and provided me with a great input and possibilities to reflect and possibly re-asses my own work’.

Dr Virginie Andre will be convening a second and a third series of workshops respectively in September and December 2020 which will specifically address the work of former extremists in this field in relation to security agencies and communities. An international working group under the stewardship of Dr Andre is also in the process of being set up to further address this particular field of practice and research.