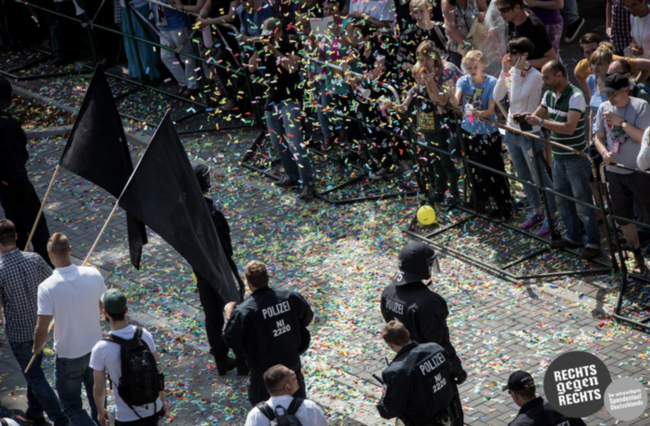 By The Tea Team.

There is a long school and sport club tradition that combines athletics with fundraising for a group or charity: the walkathon. The principle is simple: a school or club organizes a sporting event – a run, walk or hike for example – for all members. In the run-up to the event, each participating child asks one or more sponsors, usually parents, grandparents or godparents, to pledge a specific sum of money per kilometer. Just 0.50 euro per kilometer is often enough to raise quite an impressive amount. The German neo-Nazi scene could never have imagined in their wildest dreams that this childhood tradition might one day put them in a quandary, though that is exactly what happened.

The Bavarian town of Wunsiedel is usually quite tranquil. Except for one weekend a year, when the quiet town becomes a meeting place for the neo-Nazi scene from Germany and parts of Europe. Rudolph Hess, the deputy party leader of the Nazi NSDAP party under Hitler, was once buried in Wunsiedel. The “Deputy Führer,” as he was called, was sentenced to life imprisonment after WWII and took his own life in prison in 1987. His death turned Wunsiedel into a cult town for right-wing extremists, who have gathered – or tried to gather – here to stage a memorial march every year since.

The bald heads and black, steel-toed work boots, the swastika tattoos, Reich flags and outstretched fists infuriate most residents. In 2004, police arrested 105 people, mainly for wearing banned Nazi symbols, carrying tear gas or other weapons, or for violating a ban on face scarves for the march, according to police reports. The rallies have repeatedly been banned or forced to take place in other cities. But the bans have never lasted. After all, Germany protects and values the rights to freedom of expression and peaceful assembly. So what to do? The citizens of Wunsiedel put their heads together and made a plan to outsmart the rabble-rousing racists.

In 2014, EXIT-Germany and the town’s citizen initiative “Wunsiedel is colorful” simply turned the planned neo-Nazi march into a walkathon. In previous years, the initiative had organized counter demonstrations and taken to the streets waving anti-racism banners. But this time heralded a different approach.

Citizens decked the demonstration route out with balloons and colorful posters featuring slogans like, “right against the right”, “Germany’s most involuntary walkathon”, “goosestepping for donations” and “the ultimate sprint instead of the ultimate victory”. They even set up tables with food for participants under the motivational slogan: “Mein Mampf. Getting the donations up and running” (“Mein Mampf” or “my nosh” is a satirical allusion to Hitler’s book “Mein Kampf”). The posters announced that ten euros would be donated to the Exit group, which helps people leave the neo-Nazi subculture, for every kilometer the right-wing extremists marched. Organizers had collected the pledges in advance.

This year, instead of closing their curtains in disgust, residents cheered the would-be black shirts. Because the further the unwelcome visitors marched, the more went into the donation pot to fight right-wing extremism. The neo-Nazis were essentially marching against their own convictions. Walkers crossed the finish line to a shower of confetti as Wagner’s Götterdämmerung blasted from the loudspeakers and were offered participation certificates as they marched past one final poster: “Thank you sports fans! 10,000 euros will now go to EXIT Germany.”

Nevertheless, the neo-Nazis came again the following year. This time, they moved their march to the early evening as a precaution, giving the “Wunsiedel is colorful” initiative a wonderful opportunity to project videos of the previous year on the walls of the buildings along the planned route. Meanwhile, the idea has been taken up by activists in other cities: more than a dozen “involuntary walkathons” have since been organized in Germany and abroad.

First published at and with the kind permission of Tea after Twelve.