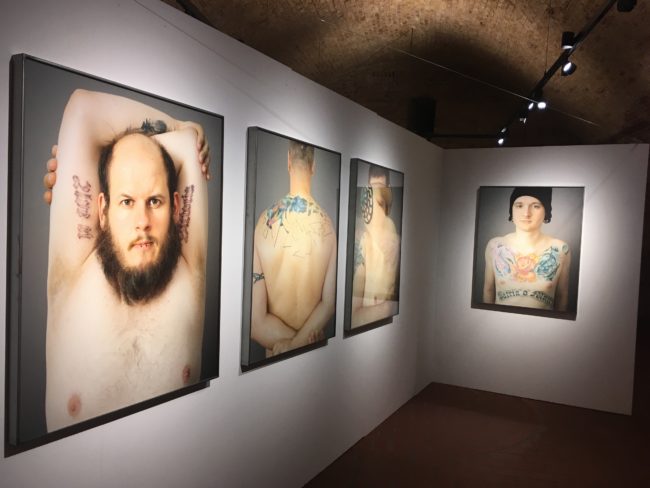 For the exhibition Haut, Stein Jakob Ganslmeier photographed – in cooperation with EXIT-Deutschland – tattoos and their removal process of people who left the violent-right-wing extremist scene. In contrast to tattoos, which tell of biographical processes of people who left the scene, photos of Nazi symbolism in public space tell of disinterest in trying to remove them.

Distancing processes are long-term processes. It often takes several years from the initial doubts that arise, to the decision to break with the scene, to the wish that no more external appearances should provide information about past views, actions, and decisions. Jakob interviewed two dropouts for the exhibition. Their stories are being played on tape in the exhibition. Marta Tremper* told about her withdrawal:

„The withdrawal doesn’t begin with the exit, but much earlier, when you wake up sometime like from one of those waking comas, it feels as if some synapse is properly polarized again and you think: „What am I doing here? Why am I doing this?“. You ask questions and deal with yourself. And that happens for sure two years before the exit.“

With these two years, Marta described the growing and difficult nature of her doubts. She reported of disgust she had increasingly felt toward herself and others in the scene. According to Marta, exits are not closed processes: „You never manage an exit 100%“. With this, she probably referred to a self-reflection process that (in the best case) does not end. The ego in the present must relate to the past, to thoughts and actions.

Analogous to the long-term nature of ideological and life-practical distancing processes, tattoo removals can take place. In the photos, you can see formers who have had their scene tattoos lasered or covert. Even after several sessions, in which the color particles under the skin are destroyed by laser shots and transported away via the liver, the tattoos shimmer out from under the skin.

What relationship do people who leave the movement develop to their bodies, on which a swastika, „home or death“ or faces of Nazi perpetrators are inscribed under the skin? Antonia Rollenstein* tells how her scene tattoos felt like „poisoning“ after she left the scene. But nevertheless, removal was not her most urgent project: „I have the claim for myself that everything is not only chic and beautiful on the outside, but also inside. Even if tattoos of people who have distanced themselves clearly refer to their past, they are not necessarily (only) thrown back on them by this. The „inside in“ is always there anyway: the sum of experiences, violence committed, be it physical or ideological, thoughts that were thought. They too inscribe themselves into bodies.

In the face of inhuman thoughts and violent deeds, I wonder what it can mean to have a scene tattoo lasered away. The freeing from a physical „stigma“? And with it the possibility to show yourself in front of others again without hiding „something“? A welcome pain when feeling remorse? For her laser process, Antonia described a renewed look back at her scene time:

„There one sits then hours either with the laser or just with the tattooing again and lets the over tattooing under really massive pain influence. There you look back at everything again, the time – what you associated with it, how poisoned you were. But even so the question: „Is that it? Is that the last thing I still perceive about the body here and do I brush it off? Or is there still a residue?“

Apart from Antonia’s „ideological rest,“ which she says she will have to deal with for years to come, there was also an optical rest. The attempt to have her scene tattoos lasered away failed because the images remained recognizable. Despite her original decision not to get tattooed again, she decided to get a cover-up. Here the old tattoo must fit into a new one and is therefore at best no longer recognizable in its original appearance.

Relating the old with the new is also a useful practice for public places. Jakob photographed architecture that is occupied by National Socialist symbolism. A not unknown castle in Austria, on which a huge swastika rises, a house facade with SS ruins and an imperial eagle above a pedestrian passage as examples. Where exactly these places are located is unclear. You will not receive a description in the exhibition, because the persons and institutions in question have decided against attribution.

Deconstructing instead of letting them disappear makes it possible to find a reference to the past that allows for reflection. Meaningful practice means setting up places of testimony and learning without allowing „re-glorification“: Neither should places „disappear“ so that they can rediscover right-wing extremist groups and make them places of pilgrimage, nor is it permissible to leave Nazi symbolism standing without commentary. The swastika on the castle ruins of Hochkraig in Kärnten was painted over and redesigned into a window cross after the exhibition was completed, 74 years after the end of National Socialism.

*The names of the participants were changed.

As part of the exhibition Haut. Stein, Jakob Ganslmeier conducted seven interviews with five men and two women who distanced themselves from right-wing extremism. In them, they talk about their entry and exit: about reasons, doubts, the decision to break up, their life after leaving, and the removal of scene tattoos. While the exhibition documents the removal of the tattoos with photos, the interviews can make the stories of the people who left the scene audibly comprehensible.

In the context of an accompanying podcast by EXIT-Deutschland, all seven interviews will be edited and recorded by different well-known persons. Thus, they can be didactically prepared as material independent of the exhibition. By means of biographical approaches, social questions can be treated in a low-threshold manner: What were/are motives for turning to the extreme right? Which moments of rupture are recognizable in biographies and led to a distancing? How do people today deal with their time in the scene?

By formulating various questions, people of all ages can work with the material and gain insights into (de)radicalization processes that have a preventive effect.