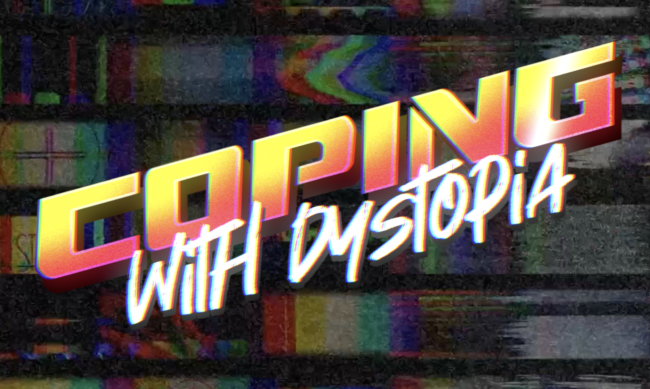 By Coping with Dystopia.

Feeling overwhelmed by the state of the world? Does it seem like society is fraying at the edges? Our podcast, Coping with Dystopia, is here to help!

We speak with people who have experienced it all and come out the other side. These are thoughtful, real-world talks that offer practical and philosophical ways to deal with the chaos. And maybe there’s even the odd glimpse of humour and happiness. Coping with Dystopia is the podcast the world needs right now.In our second episode, we are coping with right-wing extremism. According to the 2019 Global Terrorism Index, far-right terrorism has surged by 320% over the last 5 years. Far-right movements often originate and grow in the online world, most likely on fringe platforms where restrictions are much more blurred than on mainstream platforms.

To help us cope, we met with Fabian Wichmann, from EXIT Deutschland in Berlin. EXIT provides support to people who want to leave extreme far-right movements. Two successful and creative initiatives made Neo-Nazis aware of the existence of EXIT Deutschland. The first one involved the distribution of a T-shirt during a right-wing rock festival. After the T-shirt was washed once, a surprise was left for the Neo-Nazis, with the contact information of EXIT appearing instead. The goal was to attract awareness and attention to the organisation. The second one, named Nazis against Nazis, consisted of a counter-protest against Nazi demonstrations. The idea behind it was that for every metre the demonstrators would walk, 10 euros would involuntarily be donated to EXIT. This action created a dilemma for the demonstrators: stopping the march or raising funds against their ideals. The outcome was pretty successful: the donation reached more than 20.000 euros. To cope with right-wing extremism, Fabian gave us five practical solutions:

1. Make your goals reachable – do what you can, and don’t try to change the world in one day.

2. Make change possible for people, make them realise they can change.

3. Build up an environment for change, so people can rely on that environment. Trust is needed for people who want to change.

4. Follow your doubts. If you are part of a Neo-Nazi environment, you will see there are a lot of people with doubts. Follow these doubts and make your own change possible.

5. Think outside the box. We normally try to solve the problems in the same way we did in the past. Sometimes, we need to do things in a different way, to solve the problem differently, in order to reach our goals and draw attention to a problem. Do something unexpected, positive, and confronting, but not aggressive. They might listen to you if you are confronting, but they won’t change if you are aggressive.

You can find out more about EXIT Deutschland here, and listen to more podcasts.