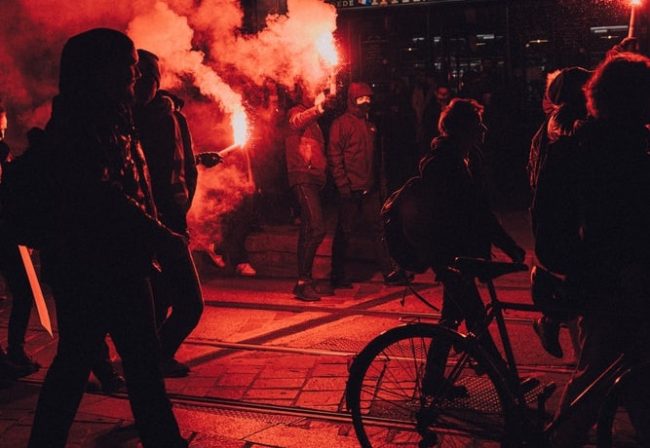 The right to disagree with your government, to organise and protest on this basis is a core human freedom and value. Europeans are free to call for the replacement of their governments and to radically re-imagine their governing institutions, up to and including calling for the disestablishment of their state or the creation of new states. These rights, when exercised peacefully, are sacrosanct. But this also means that there is always the danger that this fundamental right will be instrumentalised.

Since 2015, various xenophobic and nationalist movements in Europe have been finding more and more topics with which to bring their agenda into the public sphere and thus into the public’s perception. This began with the protests around the Pegida group in 2015, which started in Germany and then spread as a model throughout Europe. Migration polarised society and right-wing extremist groups tried to profit from this. It took several years for this wave of protest, which sometimes demonstrated on a weekly basis, to subside. The apocalypse announced by these groups failed to materialise, and thus there was an increasing lack of issues with which the actors of this movement could be perceived.

This changed in 2020 with the outbreak of COVID-19 and the associated state measures to respond to the pandemic. The measures to contain COVID-19 were associated with the most drastic restrictions on civil rights since the Second World War. And being against this or peacefully protesting against it is not extremist per se. Groups that had previously relied on the issue of migration and fleeing as a tool of political agitation now needed a new topic and, after a phase of reorientation, found it in the state measures to contain the pandemic. Smaller protests, with very heterogeneous backgrounds, grew into large demonstrations. Different ideological groups invaded the public space and tried to gain sovereignty of interpretation. There were participants with different motivations, alongside right-wing extremist actors and powerful influencers. It was difficult for politicians and the media to categorise the protest ideologically. Especially because the topic was socially polarised and the effects of the pandemic, as well as the measures against it, affected all parts of society. And it isn’t over yet.

Existing fears, insecurities and mistakes in the communication of politics and science were used by groups to further fuel the mood via social media and other forms of modern communication. In the process, parties were founded or existing parties developed into monothematic actors who wanted to expand their reach with their protest and also use conspiracy narratives and apocalyptic narratives for this purpose. Conspiracy narratives that marked a clear enemy image: politics. The aim of this polarisation was to carry one’s own political goals into the social sphere, partly covertly, and thus to make them accessible.

The result of this coordinated polarisation were partly violent riots in many European countries and an unjustified generalisation of the protest’s perception and description. But there were violent attacks, death threats for politicians and scientists, damage to property and even riots. There have also been individual tragedies, where people committed suicide, murdered individuals or, as happened in Germany, murdered their entire family. The ideological basis for this were these apocalyptic narratives. The degree of radicalisation of groups that had not previously been perceived as violent and the heterogeneous nature of the protest groups led politicians and academics to seek a name for this phenomenon. The protests, while referring to concrete measures in connection with the fight against the pandemic, generalised the addressee of their criticism to politics in general. Thus, it was no longer the measures that were conveyed as the enemy image, but politics in general, as it was held responsible for the situation. Fuelled and reinforced by the processes described above. The result: weaponised distrust. According to the 2022 Global Peace Index (GPI) “The pandemic pushed many countries towards economic and political crises, while also heightening levels of anti-government sentiment and distrust of authority,” the report stated. “Countries that had become progressively more peaceful experienced outbreaks of protests and violence aimed particularly at the government’s handling of the pandemic.”

Due to the size of the protest and its propensity for violence, as well as the fact that responsibility was addressed to politicians, the protests were described under the term “anti- government sentiments”. In some countries, the term also found its way into official observation categories, for example for the domestic intelligence service. A term that at first glance seems to summarise the broad field of actors and issues, but on closer look it poses problems. If one looks at the meaning, it describes an attitude that is directed against a government or an administration. This points to the first problem. The term says nothing about the quality of the protest. Is it violent? Further, it does not say anything about the content or the underlying ideology. What does the anti-government sentiments category convey? What political goal, what ideology underlies anti-government sentiments? In addition, there is the underlying yardstick, with reference to the contextual conditions. Who defines a protest as legitimate or illegitimate, and under what conditions? What social or historical conditions affect the interpretation of the term and how is a protest evaluated under changing social or political conditions? Because of these ambiguities, the term runs the risk of criminalising legitimate protest or narrowing the space for criticism of state action.

It is obvious that the protests around the measures to combat the pandemic were instrumentalised by politically marginalised groups. It is clear that polarisation was followed by radicalisation, which in part had dangerous developments for the police but also for society. The protests have shown that it was always about balancing individual freedom in relation to society and that individual behaviour has an effect on society. There is also no question that there is a need for a decisive response. It is important to understand that so called anti-government sentiments were used by that extremist and other violence- oriented groups, because they wanted to use social protest for their own purposes. And thus wanted to instrumentalise the protest as a revolutionary swing mass, so to speak. Furthermore, the actors and groups described are not to be understood as a homogeneous group.

Therefore, the term only describes a social phenomenon and can therefore lead to incorrect conclusions when dealing with it. It affects the media, politics, the educational field as well as the pre-political space. Nevertheless, in addition to describing and evaluating a phenomenon, we should think more intensively about the naming or re-naming of this phenomenon. Because the problems we are facing are real, but we have to name right.

The article was first published in Spotlight. Spotlight is a quarterly publication for the RAN’s network of practitioners. With kind permission of the Radicalization Awareness Network (RAN).

The RAN is a network of frontline practitioners who work daily with both those vulnerable to radicalisation and those who have already been radicalised. As civil society representatives, social workers, youth workers, teachers, healthcare professionals, local authority representatives, police officers and prison officers, they are engaged in both preventing and countering violent extremism in all its forms and rehabilitating and reintegrating violent extremists. Fabian Wichmann (EXIT-Germany) is on of the Co-Leader of the WG C&N.

Since it was founded in 2011, the RAN has attracted over 6,000 practitioners, who collectively represent all EU Member State.